To support their cut grade the AGS released the ASET which is a tool used to assess a diamond’s interaction with light.  The more light a diamond can return to the viewer’s eyes, the more impressive the diamond appears. 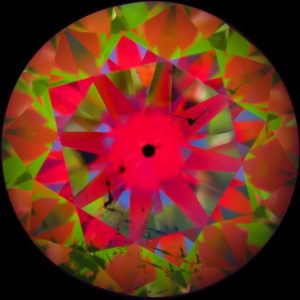 Our 2.13ct diamond before cutting

The tool is fairly easy to use and the results easy to understand, even to the untrained diamond shopper.

Essentially you want a diamond to have as much red as possible.  Light pink, green and black areas all represent light leaking out of the diamond.  When the light leaks out the viewer of the diamond does not see the sparkle or fire that would be shown if the diamond were well cut.

The diamond on the right does not look very healthy.  The symmetry is just not happening and it shows a lot of light leaking out all over the place.

While the diamonds visual appeal was not that bad (OK it was bad), it would not rank as an AGS 0.

Lets cut by numbers, we have sent this diamond out for recutting and it should be back in a few weeks.  I’ll do another posting when it comes back with the ASET photo and we can see the difference which will be amazing.

For those curious about the black stuff in the image, the dot in the very middle is a culet.  It is slightly large and most modern well cut diamonds do not have them or if they do they are very small.  The other black stuff down at the 6’oclock to 8’oclock area are inclusions.

* UPDATE * This diamond is back from the cutter, you can view the new diamond online and see how it turned out.