Got boron?  If a diamond crystal contains trace elements of boron, you can end up with a blue diamond.  Currently there are nine grades defined for blue diamonds. 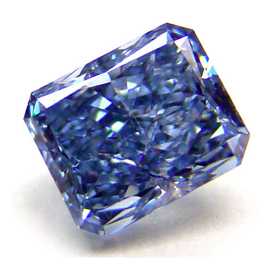 I am going to start new quest, something that I expect will take years.  I accept the fact right now, that I may never find the elusive blue diamond.

There are four ways to get a blue diamond.

While HPHT is considered a treatment, the result of the process is permanent and looks much more authentic than diamonds that are irradiated.

As part of my quest I will do several articles on the types of diamonds, the HPHT process, some lab equipment and hopefully I can get some experts in the field to provide some technical content as well.

Looks like the GIA is finally releasing their new report format.  They attempted it in 2013 as well, but just before launch they pulled them for some reason.

I have a few stones at the GIA right now, will post up photos of the new report(s) when I get the batch back.

They are adding a QR code to the reports, so you can easily look-up the details online.  Of course with every new generation of report they have added some new security features, hopefully to keep one step ahead of counterfeits.

I always hate when new report formats come out, because everyone wants the ‘new’ report.  I don’t know if stones with ‘old’ reports start trading at a discount, but I’ve seen dealers turn their nose up at old report formats after a change.