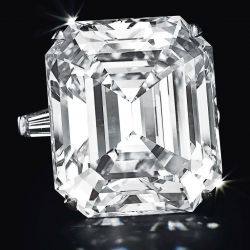 For the vast majority of people I believe diamonds are not an investment.  If you buy an engagement ring you should not expect the resale value to exceed your purchase price for a long, long time.  If you have excess cash, try stocks, bonds or gold.

Are there exceptions?  Apparently so, lets take a look at a diamond that sold at auction today at Christie’s New York.

The diamond sold was a rectangular-cut diamond, weighing 50.01 carats with a GIA report stating the color as D and the clarity as VVS2 along with a work diagram indicating that the clarity may be internally flawless if recut.

Back on April 12, 2005 the same diamond was sold at auction (also by Christies’s New York) for $4,216,000 ($84,000 per carat).  Back then it had a GIA report stating the diamond had flawless clarity, so someone must have been wearing it or using it and the diamond suffered a bit of damage since the sale in 2005.  Even with the damage the diamond increased in value by 99%, try finding another investment from 2005 through today with that type of return.

So who buys these diamonds?  Often if it is a private buyer they often remain anonymous, but for each of these sales the buyer was Laurence Graff of Graff Diamonds.

One Response to “Diamonds are a Bad Investment – Oh REALLY?!?”